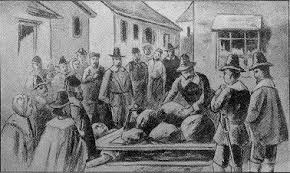 Giles Corey holds the distinction as the only person in the New World executed by pressing or peine forte et dure, the death he met as an accused witch during the Salem witchcraft hysteria. Corey achieved fame by calling out for “more weight” as men placed more stones and rocks on top of a board placed over his body. Pressing was considered one of the most severe forms of execution and had been abolished in the colony. Evidently, most Christian civility and common sense were cast aside during the year of 1692 in Salem and Ipswich.

Giles Corey was a prosperous, but uneducated farmer from Salem. He wasn’t a particularly principled man and was brought to court on numerous occasions since the time of his youth. Some of the charges brought against him were sleeping on watch and once having his weapon stolen from him while doing so. He collected a canoe load of firewood during the time he was supposed to be on watch and stole food, tobacco, knives and several other small items to which he confessed.

Corey was involved in several physical tangles with neighbors, resulting in one man’s death. He was brought to court on suspicion of abusing the body of Jacob Goodell after he was seen “unreasonably” hitting Goodell with a stick nearly a hundred times. For this crime, Corey was only fined.

Arson was another criminal act Corey accused of when he set fire to John Proctor’s house. Proctor and Corey would be two of the men put to death as accused witches in 1692.

Giles Corey’s wife Martha made a grave error in March of 1692 when she publicly questioned the sincerity the hysterical young girls accusing other of witchcraft. The girls responded by accusing Martha’s specter of tormenting them and that she had been seen praying to the Devil. Goody Corey went to jail, and Giles came to his wife’s defense.

Predictably, the girls countered with accusations of witchcraft against Giles in April 1692. Ann Putnam claimed that the specter of Giles Corey visited her and asked her to write in the Devil’s book. Putnam also claimed that a ghost appeared before her to announce that Corey had murdered it. The other girls described Corey as “a dreadful wizard” and recounted stories of assaults by his specter.

Corey was examined by magistrates in April and left to languish with his wife in prison for five months. During Corey’s case before the grand jury, nearly a dozen witnesses came forward with damning evidence that Corey served bread and wine at a sacrament attended by over fifty witches. Corey knew he faced conviction and execution but he refused to stand for trial.

During his pressing, Corey defined his witchcraft trial as a sham by his silence. He was supposed to answer “by God and my country” which implied a desire for judgment by God and by a jury. Corey simply refused to participate and may have wanted to speed the end of his life. He had been in prison for some time and was in his eighties.

At the very end of his life, he had to endure the grim irony of being unable to speak even if chose to do so. The weights forced his tongue out of his mouth, and the sheriff forced it in again with a cane.