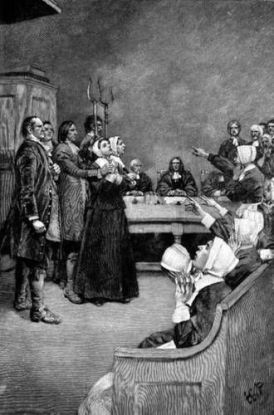 One of the greatest travesties of justice in American history was that spectral evidence was allowed as court testimony during the Salem Witchcraft Trials in 1692. Spectral evidence is based on the visions, hallucinations, or dreams of the accuser. Today, it is inconceivable that any sane person would consider this type of evidence as valid, and there were some in colonial New England who would have agreed

A specter is a spirit or ghostly apparition that causes torment to its victims. The problem is that others cannot see the specter even though they may observe the alleged victim writhing in pain. Only the “victim” and perhaps a few of her friends were privy to observe the specter. This evidence was considered admissible at the time because the Puritans believed that the Devil and his minions were at work and powerful enough to send their evil spirits to lead pure, religious people astray. 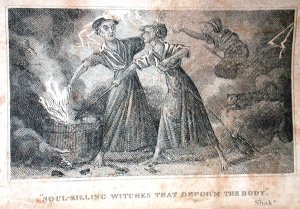 END_OF_DOCUMENT_TOKEN_TO_BE_REPLACED

N is for Nimrod, the Indian who made it into the Essex Court Records a few times. At first, he was like most of the other Native Americans from the area and hoped that the Puritans would help to defend his tribe against their more aggressive enemies.  Eventually, Nimrod began more antagonistic actions towards the Puritan community. The delicate and controversial topic of the Puritans and the Native Americans needs to be reviewed before Nimrod’s actions can be understood. 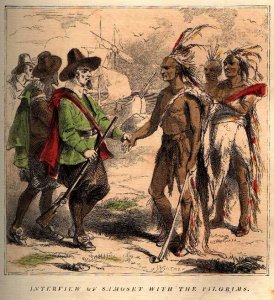 The Puritan’s initial contacts with the Indians were mostly for trade and diplomacy.  In the earliest colonial decades, Puritans were vastly outnumbered by the Native Americans and were attempting to establish themselves in the area.  Missionary attempts to convert the native populations were still considered too much of a risk.

END_OF_DOCUMENT_TOKEN_TO_BE_REPLACED

Giles Corey holds the distinction as the only person in the New World executed by pressing or peine forte et dure, the death he met as an accused witch during the Salem witchcraft hysteria. Corey achieved fame by calling out for “more weight” as men placed more stones and rocks on top of a board placed over his body. Pressing was considered one of the most severe forms of execution and had been abolished in the colony. Evidently, most Christian civility and common sense were cast aside during the year of 1692 in Salem and Ipswich.

END_OF_DOCUMENT_TOKEN_TO_BE_REPLACED 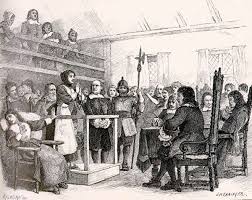 Witches and witchcraft are popular areas of interest in today’s culture and media. To feed this fascination and curiosity, recent movies and fantasies have perverted and distorted this important and fascinating period in American history. So, here is my attempt to educate the American public!