History has treated Tituba unkindly. Best known as the slave who supposedly sparked the Salem witchcraft hysteria in 1692, Tituba’s entire life was filled with oppression and tragedy.

Tituba was born in an Arawak Village in Guyana, South America where she was captured during childhood.  She was then taken as a slave to Barbados, the Carribean island that brought slavery to the Americas in 1627. Samuel Parris, the future minister of Salem Village, was a plantation owner on the island and purchased Tituba when she was a teenager. She and two other male slaves were brought to Boston in 1680 by Parris.

In November 1689 Samuel Parris moved at least two of the slaves with his family to Salem Village when he was appointed as the new minister. Tituba was described in court documents as an “Indian woman, servant” although later books and documents describe her as black or of mixed race. She is sometimes referred to as the wife of John Indian, Parris’ other slave.

From the beginning, Tituba played a significant role in the story of the Salem Witchcraft Hysteria. In late February of 1692, Reverend Parris summoned a doctor to examine his daughter Betty and niece Abigail Williams who were both suffering from strange behaviors. The doctor had never observed the symptoms and could only conclude the children were the victims of witchcraft. This set off a year-long panic and hysteria in Salem Village and the surrounding towns.

The young girls quickly pointed to Tituba and two other women from the village, Sarah Good and Sarah Osbourne, both noted for their peculiar and antisocial behaviors. Tituba confessed to engaging in witchcraft although it must be pointed out that her status as a slave and the fact that Parris beat her to elicit information makes her testimony questionable. At the time, confessing to witchcraft gave the person immunity from hanging, but not from prison.

Tituba’s confession likely gave legitimacy to the suspicion of the role as a practitioner of witchcraft as an explanation of the girls’ fits and strange behaviors. She provided deals of her involvement with the Devil and his minions to the examining justices from the court.  A number of sources asserted that Tituba introduced occult practices to the girls that subsequently triggered their strange behaviors. Some scholars claim Tituba learned these supernatural practices in the Caribbean and carried them into the parsonage in Salem Village.

Stories and some newer historical accounts tell the story that Tituba enthralled a small group of girls in the village with demonstrations and tales of African or Caribbean voodoo and magic spells.  In fact, all that was recorded in the court records was that the girls’ initial hysterics came after participating in fortune telling. Predicting the future using an egg white in a glass of water was a rather common, but forbidden ritual in Puritan New England. Tituba never confessed to the practice of fortune telling but is linked to this event likely because of her Caribbean roots.

It is easy to understand why the locals considered Tituba a possible witch. On February 25th, she and John Indian followed the suggestion of a neighbor named Mary Sibley to make a “witch cake.” Tituba supposedly made a rye cake using the urine of the afflicted girls. The “witch cake” was fed to a dog to see if its behavior changed. The dog’s reaction was not recorded, but the scheme focused suspicion on the possibility that Tituba was indeed a witch.

The Salem Trials might have ended with arrests of the first three accused women, but the details from Tituba’s several examinations by Judge John Hathorne in March sparked the intense and rabid Salem witch hunt. Tituba described her conversations with evil pigs, a great black dog, a red and black cat, a yellow bird, a hairy creature that walked on two legs and rats who all ordered her to do their bidding. She also claimed to have personally witnessed Sarah Good and Sarah Osbourne transform into strange, winged creatures.

But, it was the following confession and dramatic testimony that convinced the people that Satan had invaded Salem:

Tituba: They said hurt the children?
Hathorne: And did you hurt them? 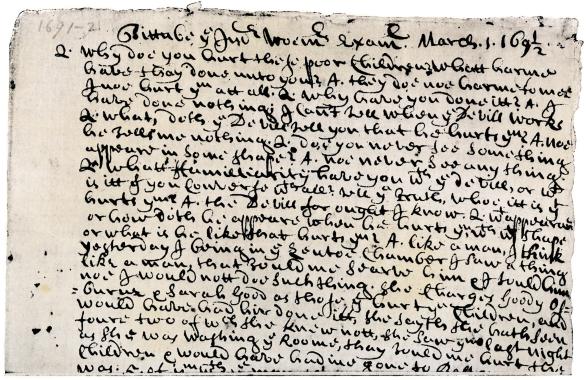 Record of Tituba’s testimony at the Salem witchcraft trials,  1690s.

Tituba provided more words of testimony and likely more dramatic moments than any other of the accused. By the fall in 1692, public opinion was changing, and sensible voices were being heard. Tituba recanted her earlier confessions, admitting she had lied to protect herself. Her retraction received little attention at the time. Only Robert Calef reported it: “The account she (Tituba) since gives of it is, that her master did beat her and other ways abuse her, make her confess and accuse her sister-witches that whatsoever she said by way of confession or accusing other, was the effect of such usage.”

It appears that few people in late 1692 paid much attention to this woman who had triggered the witchcraft hysteria that caused the deaths of twenty innocents. On May 9, 1693, a grand jury in Ipswich declined to indict Tituba[1]. They wrote “ignoramus” on her paperwork declaring her not guilty due to a lack of evidence, and she was spared from the gallows.

Tituba remained in a Boston jail because Parris refused to pay her jail fees, a requirement of release even if found not guilty. Tituba was sold to an undisclosed person for the price of her jail fees. No more is known of Tituba after this time. She didn’t fade into the history books but instead became the topic of extensive research and speculation as the “slave caught in the eye of the Salem witchcraft storm.