Blizna and Niwiska: Their Place in the History of Space Exploration

Blizna, along with the neighboring village of Niwiska shares a prominent place in the history of space travel. It was from Blizna that the V-1 and V-2 rockets were launched for experimental and training purposes during WWII. The space race between the Soviet Union and the United States had its origins in these remote villages because of what scientists had learned about rocket engineering. Much of this information and fragments from crashed missiles were smuggled to the Allies due to the amazing dedication of the local foresters and AK or Armia Krajowa.

The story begins in the years preceding WWII. Wernher von Braun, a preeminent scientist of Germany’s pre-war rocket development program and later the post-war director of NASA’s Marshall Space Flight Center was inspired in the 1930’s by a science fiction movie “Woman in the Moon.” What had been conceived as a creative and ambitious vision that could develop space travel was turned into a sinister weapon of mass destruction by the Nazis. Von Braun worked at the Peenemunde and Blizna test sites and personally visited the missile impact areas to troubleshoot any problems discovered during trials.

The development of the V-1 flying bomb and the V-2 missile was originally housed in Peenemunde on the Baltic coast in Germany until the Allies destroyed much of the facility in August 1943. While the scientists’ housing was the first target, the British also destroyed the nearby concentration camp. Some of the prisoners who perished were the ones who first alerted the British to the existence of Hitler’s top secret weapon’s program.

The V-1 and V-2 missile program was then moved to the secluded area near Blizna in the fall of 1943. The adjacent village of Niwiska had been previously evacuated to house an SS military base in May 1941 and had been well developed by the time of the missile program’s move to Blizna. The SS, which stands for Schutzstaffel acted similarly to a police force. They investigated, policed, and rounded up people and took them to concentration camps.

The new location in Blizna was desirable as it was outside of the range of the Allied bombers. Most of the villagers had already been evacuated to live in nearby villages. Other villagers who were forced to serve the Nazi’s goals lived in facilities in Blizna and Niwiska while they worked in construction, farming, carpentry and as a maids, cooks, and servants. 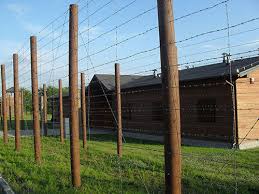 Two hundred of the slave laborers came from the concentration camp in nearby Pustkow. They were used to build the new infrastructure starting with concrete roads and then a narrow gauge railway to link to the station at Kochanowka. Barracks, bunkers, buildings and specialized equipment for the firing of the rockets were needed. During WWII 15,000 people died in the Pustkow Concentration Camp: 7,500 Jews, 2,500 Poles, and 5,000 Soviet captives.

Sketch by a prisoner of the Pustkow Concentration Camp

Efforts were made to disguise the site from the locals as much as possible. The Nazis did this by building an artificial village. Cottages and barns made of plywood, lines hung with clothes and bedsheets, and plaster statues of people and animals were created to enhance the deception.

The site in Blizna was of high strategic importance and attracted personal visits from the most high-ranking Nazi officers: Heinrich Himmler, Hans Hammler, and Gottlob Berger. Adolf Hitler visited in the spring of 1944.

The missile testing ground at Blizna, commanded by Dr. Walter Dornberger, was soon identified by the Polish resistance movement thanks to reports from local farmers. The AK field agents managed to obtain pieces of the fired rockets by arriving on the scene before German patrols. It can be said that the Germans were aware of the AK, but also the AK was always watching the Germans.

The AK was also actively involved in the sabotage of the missiles originally built at the Mittelbau-Dora Concentration Camp. A group from the Polish underground had infiltrated the crew and sabotaged the construction. Once the flawed rockets were placed on their launching pads, they did not follow the programs and commands of the microcomputers. The rockets would lift off but then fall back either directly on the spot or would fly off course.  The saboteurs had either cut the wires or slackened the fuel conduits.

Learning of this sabotage, Von Braun intervened and decided that the rockets should be dismantled before transport and then reassembled in Blizna. This was done in the assembly hall close to the barracks near the road to Blizna.

Many local rangers or foresters from Blizna and Niwiska were also agents of the Home Army. Forest Inspector Stachowski was the leader of this close-knit group. The Germans suspected the foresters, but the amount of wood they supplied was an incredibly valuable service and resource for the Nazis. The foresters had access to virtually every location in the local heavily forested territories, and their contributions to uncovering V-weapons secrets were immense.

While bits and pieces of rockets were readily found, most were covertly transported to the Allies for decoding.  Sometimes, local farmers repurposed the high-grade metal into shovels and tools. These heroic acts of sabotage came at a high price: the Nazis killed an average of 300 workers working on the missile production every day.

So, it can be said that Blizna and Niwiska had a prominent role in America’s space program. Out of the ashes of Nazi-occupied Europe, a group of German scientists decided to cut a deal with the Americans. They carried the keys to the Space Age. Their German rocketry expertise was combined with the efforts of independent wartime scientists in California. The research and knowledge acquired from the V-1 and V-2 missile program that ended in Blizna would lead to the first intercontinental ballistic missile, the first spy satellite and the “small step” taken by astronaut Neil Armstrong.