Five Things You Might Not Know About the Salem Witchcraft Trials and Hysteria (and you need to as you read my novel “In the Shadow of Salem” to be released June 18, 2018.

Witches and witchcraft are popular areas of interest in today’s culture and media. To feed this fascination and curiosity, recent movies and fantasies have perverted and distorted this important and fascinating period in American history. So, here is my attempt to educate the American public!

1. People accused of witchcraft were not burned at the stake in the American colonies.

The colonies were under British rule, and their laws disallowed the burning of witches by the time of the Salem hysteria. Witches were still drowned, beheaded or burned at the stake in other some parts of the world. In all, twenty people died in Salem in 1692: nineteen people died from hanging, and one man was pressed to death from the weight of stones upon his body.

Quaint, bucolic Salem Village no longer officially exists. Most of the infamous events took place there, but the surrounding villages and towns were also affected.

Salem Village was originally settled in the 1630’s and was five miles to the east of the larger, more prosperous town of Salem. Salem Village was primarily inhabited by farmers, and the outbreak of witchcraft accusations began in the local minister’s home. His young daughter and niece were two of the “accusing girls.”

Salem Village was renamed when Danvers was created as a new district in 1752, perhaps to extinguish the village’s reputation about its past. The casual visitor to Danvers may have some difficulty locating the important sites related to the witchcraft trials. The serious student of the witchcraft trials can, however, find a wealth of information on the internet and local places dedicated to more accurate history. Danvers treats its history with respect and doesn’t put flashing neon signs on its important historic sites.

Those who are fascinated with modern day interests in witchcraft will have no trouble finding businesses and faux museums specializing in “witches, warlocks, and witchcraft.” They simply need to travel to the coastal town of Salem. The Witch House, home of Judge Jonathan Corwin, is the only structure still standing in Salem with direct ties to the Witchcraft Trials of 1692. Other worthwhile places to visit are the Peabody Essix Museum, the Old Burying Point Cemetery and Memorial to the Salem Witchcraft victims and The House of the Seven Gables.  Salem is a lovely town, but some businesses work hard to capitalize on the area’s history.

I cringe whenever I force myself to watch The Crucible* and admit that I can’t abide it for more than about twenty minutes. The Crucible was originally written as a play by Arthur Miller using the trials as an allegory for Joseph McCarthy’s spurious crusade against communism in the 1950’s. The play and movie are highly fictionalized.

The most offensive flaw is the premise that John Proctor and Elizabeth Parris’ adulterous affair triggered the witchcraft hysteria. In the play and subsequent movie versions, John is a handsome young man, and Elizabeth is in her mid to late teens. In reality, John Proctor was over sixty years of age, and Elizabeth was about eleven. No research, records or other pieces of literature assert this unlikely affair ever occurred.

Much preferred is “Three Sovereigns for Sarah,” produced by American Playhouse and meticulously researched by the writers. The movie is available through PBS and portrays the witchcraft trials and time period with respect and accuracy. Richard Trask, the eminent historian and expert on this topic and archivist for the town of Danvers, was the historical consultant on this project. If only they could redo some of the background music…

Between the years 1692-1693, over two hundred people were accused during the Salem Witchcraft trials. Of that number, 52 women and 7 men were tried; 26 women and 5 men were convicted, and 15 women and 5 men were executed. The last hanging was on September 22, 1692.  Four more people died while in prison.

The first accusations were made against a few townspeople who were “easy” victims. On March 1, Sarah Good, Sarah Osborne and Tituba (the minister’s slave from the Caribbean) were arrested and brought to Nathaniel Ingersoll’s “Ordinary” (tavern and inn). Their bodies were searched for “witch marks” by Mrs. Ingersoll.  When the magistrates arrived, they discovered the crowds had swelled, and the proceedings were moved to the nearby Meeting House, the building where Sabbath services were also held. Soon, respected church members were amongst those accused of witchcraft. 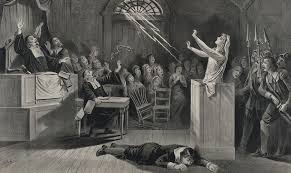 The concept of a specter is difficult for 21st-century thinkers to consider. Even more challenging is the suggestion that a specter could ever be allowed as evidence in a court of law. Specters are spirits or spectral shapes that appear to a victim at the time the accused person’s physical body was at another location.

Imagine this: my specter comes upon you, pinches you and entices you to sign the Devil’s book in blood. No one else witnesses the event as my specter is not visible to those who can see your body. So, you fall to the floor, scream and writhe, and it looks as if you are fighting off an invisible demon that no one but you can see.

Spectral evidence was accepted in the courts during the Salem Witch Trials on the basis that the devil and his minions were powerful enough to send their spirits to pure, religious people in order to lead them astray. The Court of Oyer and Terminer, formed in June 1692 to hear the backlog of court cases, recognized spectral evidence despite that it was not in keeping with the generally accepted procedure of the time. The use of spectral evidence was disallowed by the fall of 1692 when the governor of the colony got wind that his own wife was soon to be amongst the accused. As 1692 passed into 1693, the hysteria began to lose steam.