We Went on an Adventure!  (to quote Bilbo Baggins) 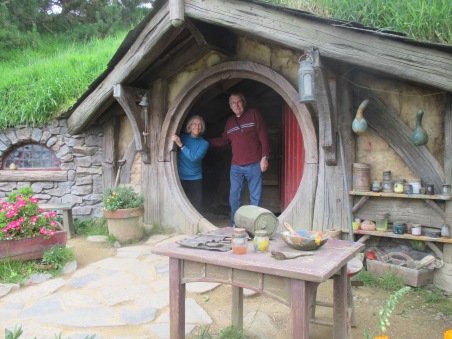 Hobbiton, outside of Matamata, is the movie set where parts of the Lord of the Rings and Hobbit trilogies were filmed. It is now permanent and one of New Zealand’s most popular tourist attractions. You don’t need to be a Hobbit fan to think a  day in the Shire is a pretty wonderful adventure! 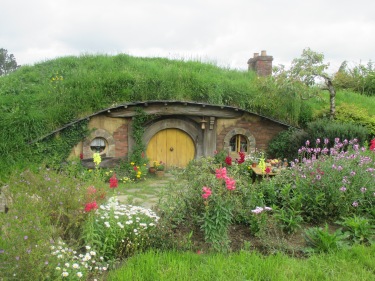 We chose Kiwi Fun Tours which was booked through Viator for this adventure. They sent us a confirmation a few days before the trip, giving us confidence in their efficiency. We were not disappointed! The driver arrived exactly at the assigned location at 9:45.

The ride was a rather long one (over two hours), but the bucolic scenery was stunning as we drove past thousands of sheep and cows grazing on the rolling hills of inner New Zealand. There are more sheep than people in New Zealand.

We made a rest stop at a roadside café for coffee and then continued on to Hobbiton and arrived at 1:15. There was time for those who wished to have a lunch in the café, but we chose to peruse the gift shop and bought a number of items such as magnets, pins, a t-shirt, playing cards, etc. I assumed we couldn’t purchase Hobbit souvenirs anywhere else so this was our only chance. 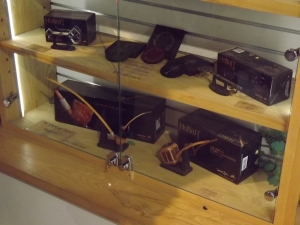 The day was partly cloudy and we realized how fortunate we were as New Zealand can be pretty rainy and were advised to try to not go to Hobbiton on a rainy day.  So blessed!

Ticketed guests boarded the Hobbiton bus with our tour guide and driver. The bus shuttled the guests to the Hobbit village perhaps just a mile or two down the road.  These spectacular 1250 acres just outside of Matamata were purchased for the movie set from a sheep and beef farmer, and we saw a stream of sheep walking down the path as the bus drove by.

Hobbiton (or the Shire) is set off from anything else. No cell towers or far away buildings are observed from this little village. Our guide walked down the path with our group of about 25 visitors and attempted to give the group interesting details of the village and its construction. You aren’t left alone because the objects are usually not secured to the homes. We were more interested in taking photos.

The production crews built all the houses with different scales, according to the scenes and the actors being filmed at. Gandalf stood in front of 60% scale (to make him look taller) and the hobbits were hanging around the 90% scale (to make them look smaller).

The details are amazing.   The set designers have transported visitors to an idyllic Middle Earth village (as Tolkien would have called it). The set was built  in two years, but they did an amazing job to make the place appear centuries old. They ‘aged’ the wooden fences by weathering the timbers with sawdust and encouraged moss growing with a vinegar and yogurt mixture.

The oak tree on top of Bag’s End was made from fiber with artificial leaves individually wired onto the tree -this is the only artificial tree inside the whole set. 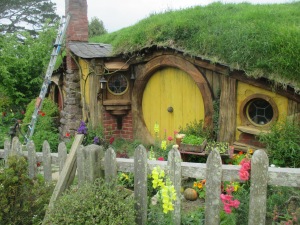 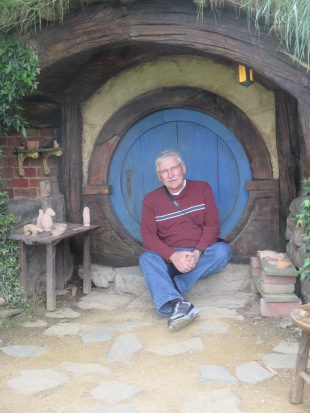 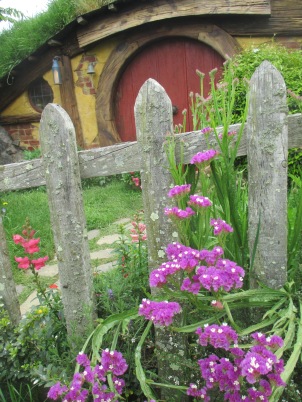 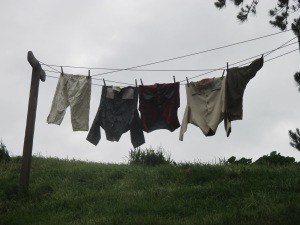 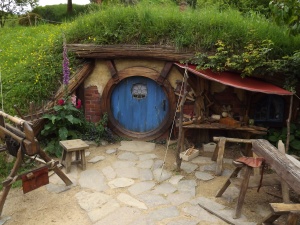 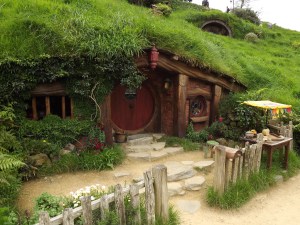 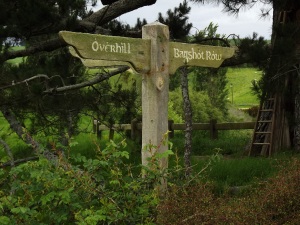 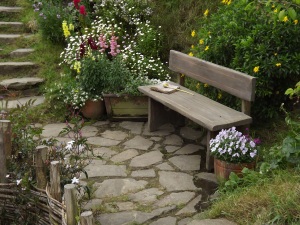 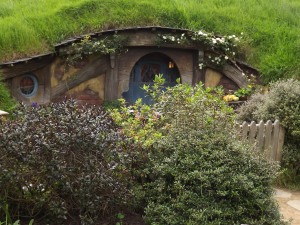 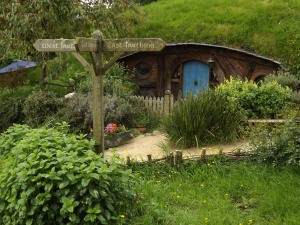 There are about forty-four Hobbit holes that can be observed with charming details. Hobbit laundry, their gardens, and .  The insides of the holes are not accessible as the indoor scenes were filmed on a set in Wellington. We were allowed to go into one hole and got your picture taken with our camera. 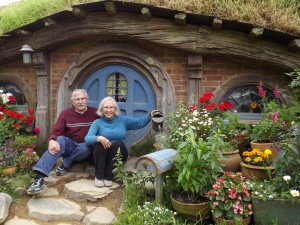 The experience was charming, like being inside a fairy tale. It might not be suitable for those with strollers or who are physically challenged. I have no idea on how a wheelchair would make it through.

The journey took us to the Mill and then over a double arched bridge as we arrived at the Green Dragon Inn where we enjoyed a cup of ale and stout. We sat at a table with some of our fellow travelers and enjoyed the warmth of a crackling fire and the figure of the green dragon over the impressive bar. 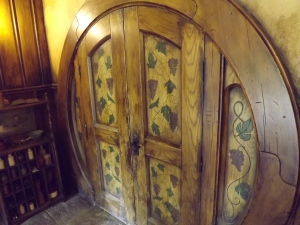 We reboarded the bus for the ride to the visitors’ center and then found our driver who took us to Matamata where we stopped at a gas station for some sensational ice cream.  Mark had rum raisin and I tried New Zealand’s famous “hokey pokey”ice cream- one very large scoop for $1.50 NZ (about $1US.) Fabulous!

We drove straight back to Auckland on a more traveled highway although the driver offered to stop if anyone needed to. Back in Auckland at 7 PM, we visited some gift shops and then walked back to the hotel.