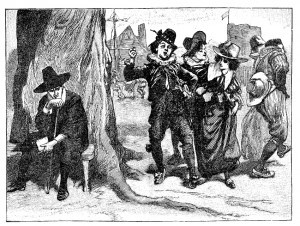 Drunkenness and alcoholism registered quite high on the Puritan’s Wickedness Scale, but that does not mean that they didn’t imbibe. Rums, beer, ale, and cider, were the favorite beverages. Moderate drinking was permitted at ordinaries (taverns) and at home. Other gatherings where alcohol was consumed were suspect and subject to investigation by the assigned church police known as tithingmen.

The original pilgrims brought more beer than water on the Mayflower because water could make you sick. Though the Americas had plenty of fresh, unspoiled water, imprudent Americans sickened and sometimes died by drinking from polluted sources. In some cases, even when it was safe to drink, river water had so much mud that a bucket of it needed to sit long enough to allow suspended material to settle.

Early colonists took a healthful dram for breakfast; whiskey was a regular lunchtime tipple, ale accompanied supper, and the day ended with a nightcap. We might think the Puritans staggered around all day in a drunken state, but most were able to handle their alcohol because it was integrated into daily life. Increase Mather, a prominent Puritan minister, delivered a sermon describing alcohol as being “a good creature of God” – although the drunkard was “of the devil.”

The Puritans enjoyed their drink at taverns referred to as ordinaries which were regulated as was the brewing of spirits. The ordinary also served food and was the hub for gatherings and conversations in the colonies.

Still, drunkenness was a surprisingly common crime in Puritan Massachusetts and was frequently mentioned in the Essex County Court records. Women’s names came up in the court records almost as often as men. Mehitabel was accused of drunkenness and brought to court on a few occasions. To Puritans, drunkenness was excessiveness and therefore sinful.

Merriment, in general, was seen as excessive; a trivial pleasure that was unnecessary and shunned in Puritan society. In England, there was the prevailing attitude “to eat, drink, and be merry, for tomorrow we will die.” This hedonistic enjoyment was in diametrical opposition to the deepest-felt Puritan beliefs. Alcohol was a necessity, but it was considered outrageous to partake in drunken behavior.

Many colonists believed alcohol could cure the sick, strengthen the weak, enliven the aged, and make the world a better place. Craftsmen drank at work, as did hired hands in the fields, sailors at sea, and soldiers in camp. College students enjoyed a malted beverage, which explains why Harvard had its own brewery. In 1639, President Nathaniel Eaton lost his job when the college did not supply sufficient beer.