Q is for Quakers 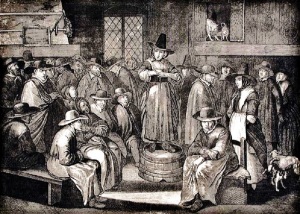 The Quakers couldn’t have presented a more dramatic contrast to the established church in Essex County. Puritans evidenced no tolerance for other faiths, and the Quakers seemed to incur more than their share of the community’s disdain and intolerance.

Puritans held a high and strict version of Calvinist theology. Their narrow interpretation of scripture did not tolerate even the slightest deviation, and sin and crime were synonymous. Their ministers were jealous gatekeepers of God’s Word, and no concept threatened them like the Quaker belief in an ordained ministers’ irrelevance.

Quakers ideas were far less rigid than other faiths, especially in their rejection of many ordinances and rituals. They discarded baptism, the Lord’s Supper and even paid ordained clergy. The Puritans considered these beliefs as heretical, especially the Quaker’s reliance on the “Inner Light” to guide them. Their worship consisted of waiting in silence until moved by the Inner Light which was then shared with the other members.

These early Quakers were not viewed as peaceful or docile but were instead just as zealous in their beliefs as the Puritans. They would burst into church services, bang pots and pans together, and would even strip naked to show they weren’t attached to worldly things. The Quakers patterned their protestations after the prophet Isaiah who went naked for three years as a sign of judgment and their impending doom. 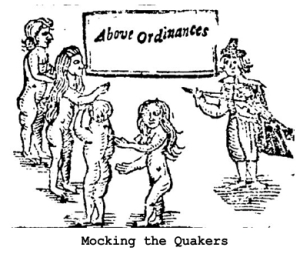 The Puritans in New England were prepared when the first Quaker preachers arrived in Boston Harbor in 1656. Ann Austin and Mary Fisher who thought they had the gift of prophecy, were arrested as witches before they even set foot onshore. While still on board ship, Austin and Fisher were ordered to be stripped naked and searched for signs of witchcraft (Devil’s Marks). Their literature was burned, and the women were jailed for five weeks before being banished from the colony.

Although the Quakers were intensely persecuted by Puritans, they continued to arrive in the Massachusetts Colony.  They seemed intent upon disrupting the staunch Puritan Society and would stand in the Meetinghouse to speak after sermons and would shout from their jail cells. The prisons became filled with Quakers, and at least four were executed.  Those who refused to comply with laws prohibiting writing and speaking out were subjected to hideous deterrents such as cutting off an ear or having their tongues bored through with a hot iron.

Despite these persecutions, the Quakers found a number of supporters amongst locals and were repeated imprisoned, fined and physically punished. In 1663, which was a banner year for Quaker protests, a group of women appeared in church naked as the day they were born. They attempted to demonstrate that they were like newborns:  innocent and without shame. Deborah Wilson’s sentence for this crime was wrought with irony. She was stripped to the waist, tied to a cart, and whipped as she was paraded through town.

A “King’s Missive” from King Charles II halted all Quaker executions, although less severe punishments continued.  After 1675, Quakers were able to freely live, work and worship after the Massachusetts’ Bay Colony experienced an influx of other faith groups.