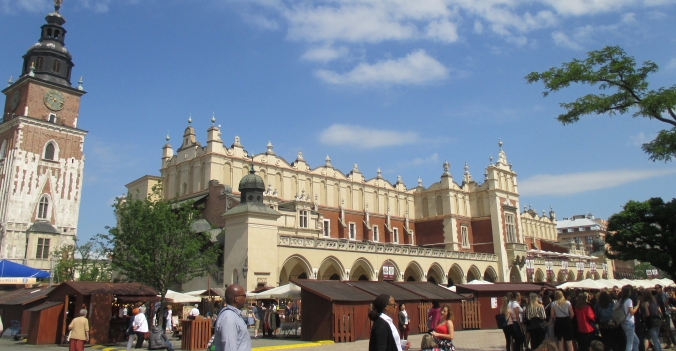 Krakow is our favorite large city in Poland. It is easy to tour, friendly, most locals speak English, and the sites are amazing. Unlike Warsaw and other Polish cities, Krakow was left virtually untouched during the Second World War. It was, however, occupied by the Nazis and they set up their regional headquarters and attempted to Germanize the city. Many of Krakow’s treasures were stolen away to Germany. Kazimierz, the Jewish area just north of the Old Town was transformed into a ghetto and the Jewish cemeteries and synagogues were left in devastation after the war. They have been partially restored and worth a visit.

Here are our top ten favorite places to visit in Krakow (not in any particular order.);

Krakow Rynek: Rynek means town square, and Krakow’s is Europe’s largest and perhaps the most pleasant one you will ever see. Horse-drawn carriages, restaurants with outside eating, music, and festivals grace this lovely area.  We were there on a mild day in May, and the atmosphere was warm and friendly.

St. Mary’s Church (Church of Our Lady Assumed into Heaven) is located in the Rynek or Main Market Square. Built in the 14th century, its foundations date back to the early 13th century. The spectacular wooden altarpiece carved by Veit Stoss sits above the main altar.

A trumpet signal called the Heunal Mariacki is played from the tallest tower. The tune stops in mid-stream to commemorate the 13th-century trumpeter who attempted to sound the alarm before the Mongol’s attacked the city. He was shot in the throat and could not complete his task.

This impressive building is a must since it is located right in the Rynek or market square.  It was once the center of international trade and traveling merchants met there to conduct business and barter. The hall once offered a variety of imports from the east (spices, silks, leather, and wax) while Krakow offered its visitors textiles, lead and salt from the Wieliczka Salt Mine.

Today, Cloth Hall offers a nice selection of items visitors might seek: amber jewelry, dolls, clothing, handmade items, Polish pottery, etc. While they are a bit more expensive than you will find around the city, this building is a one-stop shopping area that offers convenience.

Zakopane: This is a mountainous region south of Krakow and a favorite hiking and skiing area for locals and tourists.  Most people recommend spending more than one day there, but it can also be done in one day. You can get there by car, bus or train, but leave early in the morning.

Wawel Castle and Cathedral: People have lived on this site for fifty thousand years, but it was King Casimir III the Great who built the first castle. It is one of Poland’s largest castles and represents nearly all European architectural styles.

While serving as the residence for centuries of kings, it is now a museum and is a UNESCO World Heritage Site.

Schindler’s List is one of the best known Holocaust movies. Oskar Schindler’s company was first established by three Jewish entrepreneurs but fell into insolvency around the beginning of WWII. and then he took over the German kitchenware shop on ul. Krakowska in November 1939.  The factory also produced ammunition shells so it would be classed as an essential part of the war effort. He managed to build a subcamp of the Plaszow forced labor camp on the premises where “his” Jews had scarce contact with camp guards. Schindler is credited with saving the lives of thousands of Jews with this scheme.

Today it is an excellent museum that illustrates the Nazi occupation of Krakow and especially the fate of the Jewish population.

The historic Jewish area of Krakow, Kazimierz is now experiencing a rebirth and restoration of important historic sites in Kazimierz and a booming growth in Jewish-themed restaurants, bars, bookstores and souvenir shops. After WWII, it was devoid of any Jewish presence and neglected by the communist authorities. The synagogues and cemeteries are being restored and a visit is highly recommended.

The former Nazi concentration camps of Auschwitz and Birkenau are amongst the most notorious in the world.  The experience is one that everyone should have and few regret it. Please be certain to NOT refer to it as a “Polish concentration camp.” The responsibility and blame rest solely with the German government before and during WWII, and Poland was culturally, financially, and personally devastated by the German/Nazi invasion in Sept. 1939. Many Polish citizens of all faiths lost their lives at the hands of the Nazis. Three million Polish Jews and three million Christians died during WWII because of the German takeover and atrocities.  Please be certain to learn the correct history of the country of Poland before you visit.

This is perhaps the world’s oldest and unique salt mine ever!  Opened in the 13th century, the mine produced table salt continuously until 2007. Today, it is an amazing attraction where the statues, chapels, and chandeliers are salt carvings made by the miners. To see an entire room out of salt is spectacular!

Although this mine requires you to walk down several flights of stairs, it is safe and walkable and you ascend on an elevator. This is one of Poland’s most popular attractions. Be sure to combine it with a visit to the Wygielzow Ethnic Museum nearby.

This charming museum is a group of houses and other structures from the 17th to 18th century. Ethnographic museums can be found throughout Europe and Poland has some of the best. These museums allow you to step back in time to see how the peasants and landowners lived.

The museum at Wgielzow can be reached by private car or a Wooden Architecture tour from Krakow.