In late September 1939, the deafening roar of war was replaced with ominous silence on the streets of Warsaw. The survivors emerged from their cellars and other hiding places and glanced upward, expecting the hail of bombs and shells to resume their terrible destruction. It was a terrifying scene of utter destruction and tragedy.

Warsaw, like most Polish cities, had been cut off from the outside world since September 1. Rumors of surrender were whispered about, and the possibility was terrifying.  Soon, the dreadful truth was revealed, and many officers committed suicide when it was clear the people were bitter with the military and now former government. 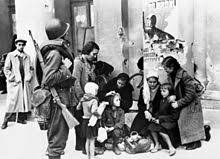 German soldiers marched into Warsaw on September 30, 1939, and were soon in complete control. Immediately, work began on removing debris and barricades, extricating corpses from beneath the ruined buildings, and removing the hundreds of dead horses lying in the streets. Restoring transportation, power, gas, and water were the top priorities.

Food supply was the most immediate and difficult problem, and at first, army field kitchens were used to feed the population. While the presence of the Germans was depressing to the Poles, these two weeks before Himmler’s men took control was relatively peaceful. END_OF_DOCUMENT_TOKEN_TO_BE_REPLACED