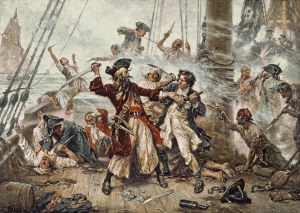 Piracy was America’s first encounter with organized crime. The golden age of piracy was from mid-1600 to the early 1700’s and flourished in the areas of the West Indies and colonial America.

The economy of Europe’s superpowers suffered greatly because of piracy but it was viewed differently in the New World. The Navigation Acts of the 1600’s were passed to strengthen England by restricting her colonies from commerce with other European nations. This had the effect of creating a black market, opening the door to maritime crimes.

Colonial merchants felt burdened with the prospect of paying exorbitant prices for English goods and also desired access to a wider variety of goods smuggled into the colonies from other nations.

Local colonial economies benefited from dealing with pirates or privateers. Many harbors exacted a per man fee for a pirate vessel to dock, and their local economies were bolstered as the crew came ashore to purchase foods, gunpowder, supplies and alcohol from local merchants. Pirates enjoyed a certain amount of celebrity as they strolled down the streets of New England.

Some historians believe that pirates, working with colonial officials, helped England hold onto the American colonies. Spain gave up some of its American empire just to get pirating of its cargo ships to stop. Indian and black slaves who were greatly oppressed by the Spanish in the Caribbean gave pirates inside information on where to dock ships and find supplies. Those who fled plantations were welcomed to join the crew on pirate ships. 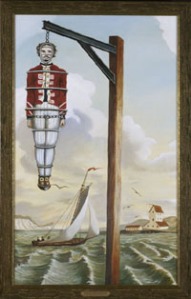 William Kidd, one of the most notorious pirates, started out as a privateer and was hired by European sovereign nations to attack foreign ships. History views him as more of a privateer who worked on behalf of the English until he went rogue on his final trip. Kidd and his crew attacked the Quadegh Merchant, a large Armenian ship carrying vast amounts gold, silk, spices, and other riches. With that ill-fated action, Kidd found himself on the wrong side with the British government. An influential minister was part owner of the cargo. When news about Kidd’s attack reached the minister, he complained to the East India Company. Kidd was brought from Boston to London and hanged in 1701. As a warning to other pirates, his body was covered in pitch and hung in a cage for twenty years for all sailors to see along the River Thames.