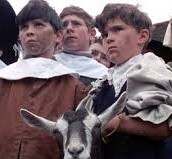 Cows held a prominent place in the criminal records in Essex County.  A charge of witchcraft could made against a despised neighbor if a person’s favorite heifer died in a mysterious manner. Certainly, cows and swine were stolen on a regular basis. These issues were mundane compared to the story of Mark Quilter’ surprise.

“How a Cow Made it Down a Chimney in Ipswich” is a legendary tale in Ipswich, Massachusetts.  Two pranksters, Thomas and John Manning, carried a small calf up to the roof of Mark Quilter’s house and dropped it down the chimney. The singled storied home made it easy to climb. Roofs were rather low-hanging in those days, and the chimneys were large and square.

The Manning brothers must have had some unknown reason for choosing Quilter as the recipient of this prank. In the dark of night, the calf must have bawled in protest during its short drop to the hearthstones.  Imagine the startle Mark Quilter and his family had seeing ashes scattered with a disoriented calf leaping around the room!