My father, Stanley Bryk served as a Boatswain’s Mate First Class in the US Navy during the World War II. He participated in four invasions, led the enlisted sailors of the USS Lyon and LST-372, shot down aircraft, and supervised the day-to-day operations of both ships. But, his adventures in New York City were perhaps the most distinctive and noteworthy.

His LST-372 returned to the States to be refitted and rearmed before the Normandy Invasion. While there, the crew made a short stop to New York Harbor where Stanley took the payroll master to Wall Street to fill the payroll slips for the sailors.  He was allowed to use a Higgins boat which is a small boat that could carry troops from ships to open beaches. They drove the boat out, docked, took care of the paperwork, and then attempted to return to the LST-372.

A developing fog in the harbor began to pose a problem.  Stanley motored around looking for the LST, but gave up and attempted to land back on Manhattan Island.  Well, at least they thought they did.  To their amazement, they passed a towering figure−The Statue of Liberty.  Stanley knew that at least he was in New York City!  They finally landed on the adjacent island; Stanley had successfully invaded Ellis Island in that dense fog.

Stanley ’s nickname in Polish was Stashu—short for Stanislaus.  Upon hearing that story, our family renamed the Statue of Liberty as the “Stashu” of Liberty. Stanley Aloysius Bryk has the distinction of claiming this monument as one of his spoils of war. I don’t recall if he received a medal for that feat.  We can assume his immigrant parents, who once took a slightly different journey in the same location would have been proud.

An authentic Higgins boat is on display at the Mott’s Military Museum in Groveport, Ohio and is now protected by a roofed structure. 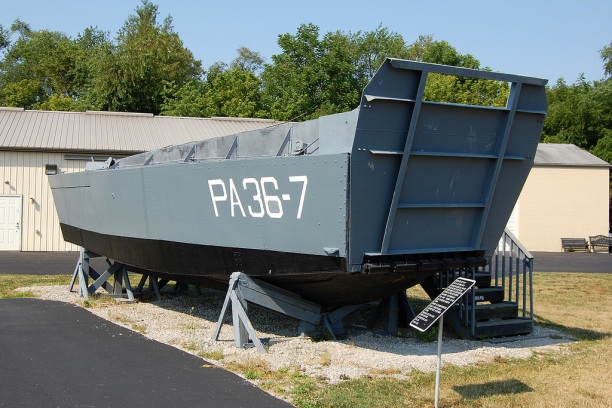 One thought on “The Invasion of Ellis Island in 1944: The Untold Story”