Jesus brought his disciples to Caesarea Philippi before his final journey to Jerusalem, as described in the Gospel of Matthew. They had been together for almost three years and were followed by crowds wherever they went. Here, in this northeastern area of Israel not frequented by pious Jews, Jesus would have some private time to prepare his disciples for the inevitable.

Jesus’ teaching in Caesarea Philippi would be the first time he spoke about his future church, and it seems curious why Jesus chose this pagan location for one of his most important lessons and revelations. Jesus, however, was a masterful, intentional teacher and storyteller. He must have selected this area for a powerful visual illustration of the disciples’ future challenges and responsibilities. In Old Testament times, Caesarea Philippi, then known as Banias, sat at the base of Mount Herman and was a pagan center of Baal worship. Eventually, the cult of Baal was replaced with the worship of Greek fertility gods and Caesar.

At Caesarea Philippi, Jesus and his disciples were standing in front of the largest rock formation in Israel with pagan statues and at least fourteen temples in the background. Without understanding the uniqueness of this visual context, a person reading Matthew 16:13 might imagine the setting to be what classical painters of religious stories created. We can’t be too upset with these Renaissance artists as they had no opportunity to travel to the real setting. 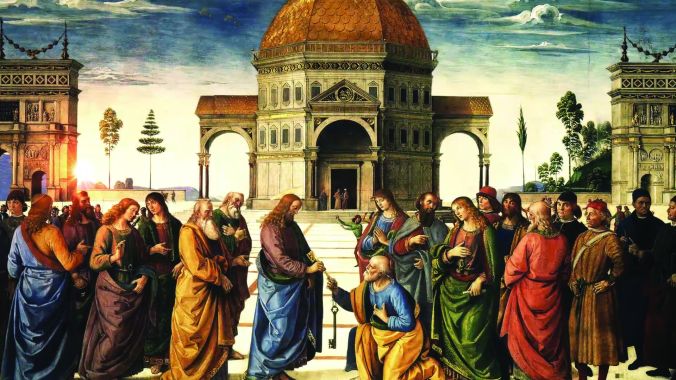 The Ancient History of Caesarea Philippi

The early Canaanites worshiped Baal at Banias, and people were thrown into the “Gates of Hell” to determine guilt for a crime. Ferocious waters gushed from a very large spring of this limestone cave. In ancient times, the water was fast-moving and would have propelled the bodies over the rocks, and death was guaranteed. The waters filled with human or animal corpses must have been a frightening sight.

Figure 2 The Cave of Pan today

To the ancient Greeks who settled in this area, the cave at Caesarea Philippi was the gate to the underworld, where fertility gods dwelt during the winter and then returned to the earth each spring. The people also believed the cave held the “Gates to Hades.”

At the time of Jesus, the most important god in Caesarea Philippi was Pan, the Greek god of shepherds and the wild. Pan’s hindquarters, legs, and horns are like that of a goat while his upper body was of a man. The Greeks believed Pan was born in this cave, and he is often associated with music and fertility. Each spring, the people of Caesarea Philippi engaged in wicked deeds, including prostitution and sexual interaction between humans and goats to entice the return of Pan. END_OF_DOCUMENT_TOKEN_TO_BE_REPLACED

This article has been modified from one of the chapters in my book Travel Back to Your Roots which is available on Amazon. The book describes how to begin genealogy for your immigrant ancestors, how to research and find records in Europe,  and how to achieve your end goal of traveling to Europe to visit their birthplace and even meet long lost cousins!  I did it and want to show others that it isn’t impossible, even if you did not inherit any information about your ancestors.

Planning a Trip to Europe: Transportation

Traveling to Europe doesn’t have to be expensive, and the internet allows you to be your own travel agent. For those who are not tech savvy, an agent might be an option, but they typically will provide mainstream and obvious options. Independent travelers will find less expensive alternatives online that will make the trip more customized.

The ideal travel months for inexpensive European travel are just before and after summer vacation months. The prices and weather are likely more favorable, and the traveler has fewer people with whom to compete. Also, many European hotels do not have air-conditioning, and some that do will not allow the guest to control the settings. The popular areas around the Mediterranean in July and August are crowded, warm, and come with premium prices. Also, August is historically the month when many Europeans travel and you will have stiff competition.

END_OF_DOCUMENT_TOKEN_TO_BE_REPLACED

Travel Back to Your Roots has just been released on Amazon.com. My goal in writing this book was to inspire others who wish to research their European immigrant ancestors and hopefully discover cousins back in the old country.

Travel Back to Your Roots is for beginning genealogists and those who may not know how to make the jump over the pond to research parish and village or town records in Europe. The reader will learn how to first find the necessary US census, church, and immigration records before tackling those in European churches and archives.

One chapter on immigration will give the reader insight into the reasons for immigration and details the Ellis Island experience to better understand our ancestors’ bravery and the struggles they encountered.

I’m optimistic you will have success in your research and therefore have chapters to explain how to find living descendants in Europe and then how to contact them. The reader will also learn how to plan a budget-friendly ancestral heritage trip.

Finally, another chapter explains how to self-publish beautiful and professional family history books and genealogies at no cost using Create Space. Check out my Amazon site to see examples of these types of books.

Starting genealogy just four years ago, I been able to go back to the 1700’s in the European records with seven out of eight of our immigrant ancestors (Polish, Swedish, and German.) I also found three groups of cousins in Poland and Sweden and was enthusiastically welcomed to visit them in 2014 and 2016. They all exemplified the saying “A Guest in the House is God in the House.”

A ebook version was released just a few days ago, so both versions are now available on Amazon.