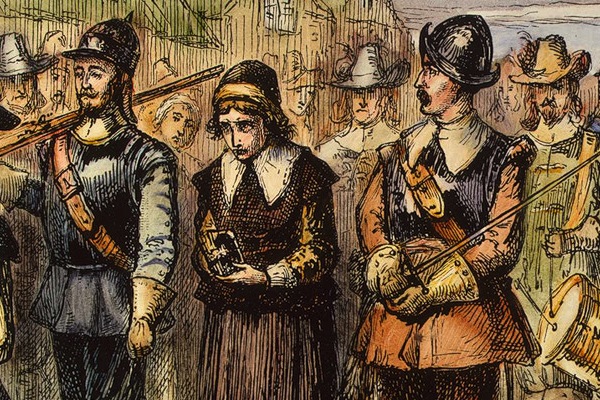 The story of Rachel Haffield Clinton’s tragic life lies buried in the early records of Ipswich, Massachusetts. Her family emigrated to New England on the sailing ship named The Planter in the spring of 1635. She grew up in an affluent household when Ipswich was a new village in the colony of Massachusetts, but the Haffield family’s fortune dwindled shortly after their arrival.

The years to come would find Rachel destitute and then accused of witchcraft during the Salem Witchcraft Trials. Rachel is one of  the fascinating characters in the newly released historical novel In the Shadow of Salem.” https://amzn.to/2GWUHzO

Rachel’s father, Richard Haffield died in 1639 when Rachel was just ten leaving his widow Martha with five daughters. Martha rented out sections of their property to tenants for income, but the stipulations of her husband’s will triggered years of bitterness and quarrels in the family. Richard’s estate was divided equally between Martha and his five daughters, some from a previous marriage.

The mental instability of her mother continued to deteriorate, and she was declared “non-compos mentis” (insane)  in 1666 by the local authorities. Richard Braybrooke, Mehitabel Braybrooke Downing’s father, testified on Rachel’s behalf when the other daughters abandoned the care of Martha to Rachel.

Rachel remained a single woman until age thirty-six when she married Lawrence Clinton, a twenty-two-year-old opportunist. She had lived twenty-four years without the legal protection of a father or brother and likely assumed Lawrence would help increase her remaining inherited wealth. Instead, he showed himself to be a scoundrel.

Within several years, Lawrence gained full control over her assets and refused to support her. In 1671, Rachel brought the situation before the courts, and he was sentenced to prison until he “hath paid her 40 shillings for times past”.

The Clinton’s marital and legal problems continued when Mary Greeley, their maidservant, was convicted of “committing fornication with Lawrence Clinton” in September 1676.

Rachel petitioned for divorce but instead was imprisoned for the allegation of her own extra-marital affair with John Ford and “suspicion of uncleanliness and other evil practices.” Rachel and John were bound by the courts to maintain good behavior, and their relationship ended. Rachel again attempted to petition for a divorce from Lawrence.

Although a divorce from Rachel was never granted, Lawrence Clinton married again and sired several children. He was frequently brought before the courts on charges of fraud.

These devastating events began Rachel’s further downward spiral and she was forced to beg for money.

In 1692, allegations of witchcraft against Rachel began to appear. Like other poor women who were amongst the most wretched in New England, she became an easy target for these accusations.

* Mary Fuller alleged that Rachel caused the death of neighbor simply by passing by her house.

* Thomas Boreman described a situation in the Ipswich meeting house where “some women of worth and quality” accused Rachel of “hunching them with her elbow.” He also alleged that Rachel was able to shape-shift into a dog and a turtle.

* William Baker attributed the loss of a significant quantity of beer to Rachel using supernatural means.

Rachel obviously had few friends to come to her defense, and her emotional state deteriorated. She was alleged to pass people on the street and yell “Hellhound” and “whoremasterly rogue” at them. She obviously made a few enemies.

Rachel was accused of witchcraft during the Salem Witchcraft Hysteria and spent months in the Ipswich Gaol (Prison) in 1692. She is one of the ten women who petitioned the Governor of Massachusetts for their release before the winter of 1692-93 set in. The letter still exists and is referred to as “The Letter of the Ten Persons of Ipswich.”

Rachel was the only prisoner in the Ipswich prison to be shackled, a punishment that required the prisoner to pay for upon release. She was eventually released and died destitute in late 1694 or the first week of January 1695 in Ipswich, Massachusetts.

Rachel Clinton is one of the characters in “In the Shadow of Salem”, a historical novel about the life of Mehitabel Braybrooke Downing.   Gordon Harris, the town historian of Ipswich gives it five stars and high praise: