2020 was to be a year of grand celebration and remembrance for the 400th anniversary of the arrival of the Mayflower on November 11, 1620. Sadly, COVID and the ill winds of political correctness and historical revisionism have put a damper on the commemoration and this incredible story.

The Pilgrims’ story and legacy deserve an accurate retelling. Some journalists have put a spin on this fascinating and complex story, unfairly depicting the Pilgrims as communists, intolerant and hypocritical religious zealots, or only as economic refugees. These portrayals are inaccurate, incomplete, and don’t consider the Pilgrims in the proper historical, religious, and cultural contexts.

Who Were the Pilgrims?

The 102 men, women, and children we refer to as Pilgrims were three distinct groups of people who sailed on the Mayflower from England. Thirty-seven were Separatists from Leyden, Holland. The rest were “Strangers,” and either members of the Church of England, Puritans, or perhaps a few who didn’t identify with any religious group. Most of the Strangers were likely quite pious and participated in the Separatists’ religious and worship meetings.

END_OF_DOCUMENT_TOKEN_TO_BE_REPLACED

Most Americans have many family immigration stories. Those of us who are second or more generations Americans have ancestors who left their homelands under unimaginable harsh circumstances but passed on few personal records to tell their story. The typical immigrant was far too busy to keep a journal, and their descendants may have discarded the once treasured naturalization or foreign birth records. 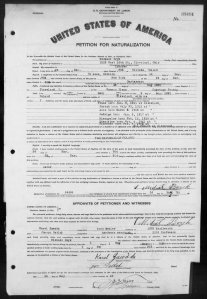 My grandfather’s naturalization records found in the National Archives

Today, Americans whose ancestors came more than a hundred years ago might consider them as the privileged ones, but these immigrant stories are just as dramatic as modern-day people who cross America’s borders illegally or wait years until their visas are approved.  The immigrants from long ago didn’t just hop off the boat and get on with their lives. Their situation was often more desperate, and they often sacrificed much more. END_OF_DOCUMENT_TOKEN_TO_BE_REPLACED