One of the most unique gifts I have ever received came from a cousin who lives in a small village in Poland. He handed me a precious gift at our first meeting with these words of caution, “Now this candle is special. It should only be lit during lightning storms or if someone in your house is on their death bed.”

This lovely candle is a gromnica (plural gromnice) and is also known as a Thunder Candle. The Polish word “grom” means a clap of thunder. Almost every Catholic home in Poland will have at least one of these long and relatively thick candles that are decorated with religious symbols and images.  In modern times, the gromnice is stored away carefully for important ceremonies such as a christening, First Communion, Confirmation or Anointing.

The most important function of gromnice has not been ceremonial but protective. As its name implies, the gromnica was believed to protect against thunderstorms and was lit and placed in windows to keep lightning away. My ancestors’ village was in the middle of a huge forest, and I can imagine the villagers knew how the destructive havoc of a bolt of lightning. Likely they saw many homes that were destroyed that way. As a child, I can recall how terrified my Polish aunt was of lightning storms. Even though she didn’t live in a forest, her intense fear of lightning was obviously passed down through the generations. Polish prayer books often contain a prayer to say during storms. 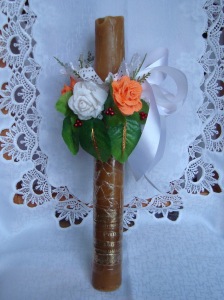 I thought about my gromnica the other day when a storm rolled through while I was hosting a Bible study at my home. My first thought was not about the gromnica, but about my computers that were still powered-on. I told my friends not to worry as my home had a gromnica, and everyone smiled as I proudly displayed my lovely golden candle.  There was no way I would ever light this treasure.  It is going to the grave with me!

Which bring us to the next important protection provided by a gromnica: at the deathbed of a loved one. It doesn’t appear that the presence of a gromnica is intended to heal or prevent death, but is a symbol of the light of life and the triumph of the soul and mind over body and flesh. It was lit for the last time at the funeral of its owner and sometimes was placed with them in the coffin. 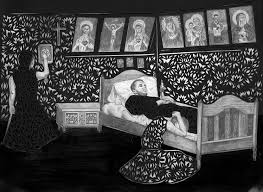 Older generations believed the gromnica offered protection against an attack of wolves. Today, wolves are rarely seen as a threat, but our ancestors had many reasons to fear wolves. Some Polish artists have depicted Mary, the mother of Jesus protecting the village from a pack of wolves with a gromnica. 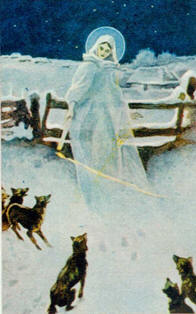 I rewrote an old story about the dangers of wolves during Puritan times in early colonial America and reading it will give you some perspective on the treacheries with which our ancestors had to contend.

A small part of a gromnica was sometimes buried in the field to keep the crops, livestock, and property safe. Sometimes a piece was buried under the foundations or thresholds of a new home to ensure its safety.

Gromnice are blessed at church on Candlemas Day (February 2nd) when the faithful decorate their thunder candles with fir twigs and light blue ribbons. A custom that is now practiced in only some villages and small towns in Poland is bringing the “blessed fire” home on Candlemas Day. The goal was to keep the candle lit up during the trip home from church, not an easy task considering the weather on a typical day in early February. 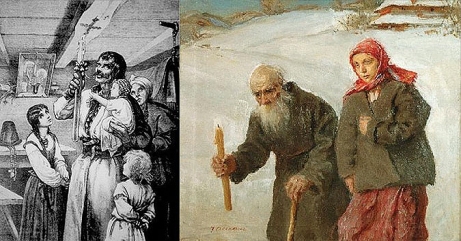 This tradition included walking through the home and every building on the property to incense them and also drop a bit of the blessed wax onto all the thresholds. The blessed fire was then used to start a fire in the stove, and the fir twigs were then burned in it. 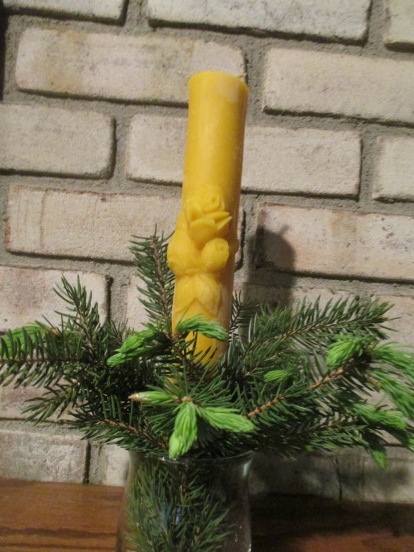 So, here my gromnica sits on my mantle in a place of honor. We are privileged we no longer have to fear wild animals or storms and now my gromnica helps me to honor my ancestors and my heritage.  How wonderful that my ancestors’ first thought during storms was to ask for God’s protection. My lovely gromnica reminds me of my connection to my dear cousins in Poland who wanted to share their lives, traditions, and customs with me.

One thought on “Gromnica: The Thunder Candle”